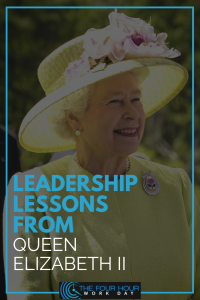 While many are mourning Queen Elizabeth II’s passing, this time is also an excellent opportunity to look back and reminisce about her legacy. As she was the longest-reigning British monarch in history, with 70 years of leadership and seeing 14 prime ministers take control of her government while she maintained Head of State, there is no denying that HRH has set the bar high and is a well-respected role model for leaders.

Let us reflect on what we can learn from her extraordinary reign.

Prepare to step up

As soon as the Queen’s father, George VI, became King, she began preparing already for her future role as the Queen. She was ten years old then. She started by observing her mother and father, then got tutored on the British constitution by Henry Marten, Vice President of Eton College. She also read Foreign Office telegrams and listened to debates in the House of Commons, all before she acceded to the throne. All her early preparations were valuable once she was appointed Queen.

The Queen is crystal-clear conscious of what is required of her position and is known to be deeply involved in the nation’s life through her wide-ranging constitutional and representational duties. Her sense of purpose shines through in everything she does- from training as a truck mechanic during World War II, opening parliament, entertaining presidents and community leaders, to appointing Liz Truss as UK’s new Prime Minister in her last days. She embodies the ‘duty first’ mindset, and she has always seen her role as a monarch as her life’s primary calling and has never put anything before the crown. As she said then, “I declare before you all that my whole life, whether it be long or short, shall be devoted to your service.”

Be resilient and adapt to change.

Over the past 70 years, Queen Elizabeth II has experienced extreme change and led with resilience. She has experienced war and peace, times of growth and recession, a pandemic, family scandals, and personal tragedies during her reign. She has also lived through many significant events and cultural milestones and has learned to adapt and move with the times. Last year, she lost her husband, Prince Philip, a couple of months before what should have been his 100th birthday, yet the Queen was back at work a few days after his passing. She has demonstrated extraordinary resilience and adaptability, which leaders should also adapt.

Although being the monarch may seem like a one-person job, the truth is it requires a strong team effort. The Queen had a solid circle of advisers she collaborated with, and she is remembered fondly as someone willing to listen. Many who worked with her described HRH as open-minded, forward-thinking, receptive to opposing viewpoints, and unafraid to change her mind. She was willing to listen to opinions and suggestions before making a decision.

As with all leaders, you must have a succession plan and an eyed predecessor who will continue your mission and vision. Queen Elizabeth understood the importance of this, and that is why she strategically mentored and trained her heirs. She allotted time to coach them on the responsibilities they were expected to complete. She understood her duty to pass the torch to the following generations.

Queen Elizabeth II is considered one of the world’s most recognizable people. And why wouldn’t she be as she has successfully built her personal brand through how she speaks and acts and her distinct style of dressing. She has a great sense of self-awareness, which reflects in how she presents herself. An authentic brand as a leader is essential for how you will be perceived and, later, how strong you can influence people.

Find time to do what you love

Lastly, even though the Queen has always been a hard worker and was entirely devoted to her role and nation, she still finds time to do the things she loves. She’s always valued the benefits of making time to take care of her corgis, visiting her horses, and enjoying her sandwiches with raspberry jam. She balances work and play and recognizes the importance of soothing your mind and soul from all the things going on in her life.

Her Majesty Queen Elizabeth II shared this during her speech at the United Nations General Assembly in 2010- “I know of no single formula for success. But over the years, I have observed that some attributes of leadership are universal and are often about finding ways of encouraging people to combine their efforts, their talents, their insights, their enthusiasm, and their inspiration to work together.”

Thank you, Your Majesty, for the lessons you have shown and taught.

Joy Collado is a freelance writer and loves to write about personal finance, self-help, and digital marketing.

Latest posts by Joy (see all)