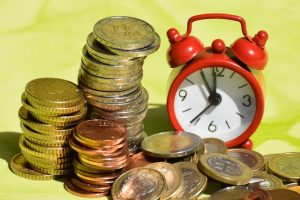 This is a guest post from Eric Rosenberg, a finance writer at Personal Profitability, InvestmentZen, and other personal finance, technology, and travel publications.

Just like you, I used to sit at my computer reading about bloggers who were able to quit their job, work less, and earn more. And like many of you, I always looked on with a hint of jealousy and healthy dose of skepticism. While the bloggers I followed tended to avoid the scammy vibe of an infomercial, there was something a little unbelievable about the idea of working at home every day and earning more than I did as a senior financial analyst at a large company. I’m here today to tell you that much of it is absolutely true.

On April 8, 2016, I walked out of corporate America for the last time and into the jungle of online self-employment. It hasn’t always been unicorns and rainbows, but it is an amazing lifestyle. Somedays I have to pinch myself to make sure I’m not dreaming. If you want to learn how it works and how I was able to quit my job, boost my income, and cut my hours through online self-employment, read on!

A Growing Side Hustle

My current six-figure freelance business didn’t start that way. Like every other business in history, it all started with the first dollar. For me, the first dollar can be traced back to high school. This was in the age of Napster and the Dot Com Bubble was on the rise. As a huge fan of The Rock, I decided to build a fan website. To do so, I had to learn HTML. I put a few Yahoo! ads on the site that earned me 5 cents per click. The entirety of that experiment earned me $5. Not a great ROI, but it put me on a path to earn more online in the future.

My side hustle was helping me pay off my debt, save more, and invest more.

I didn’t realize it, but at the time I was side hustling I was also writing my resume for a new online venture: freelance writing. As my blog was about personal finance and I had two finance degrees, it was a logical fit to start writing for other companies who needed financial content. I started small with a few clients here and there and my income started to take off. In 2014, my side hustle income grew to $25,976 almost enough to cover my entire rent for the year! In 2015, I made $40,721. That’s when I seriously began to consider leaving my day job.

The Leap to Self-Employment

From 2014 through 2016, I worked as a Senior Financial Analyst at large companies with many thousands of employees. I was paid well in these roles and was doing well in my career. I also welcomed my first child in October 2015, so a steady paycheck was very much appreciated.

However, that $40,000 revenue started to eat away at me. I earned this working just 10-20 hours per week on my side hustles. I began to imagine what my income would look like if I spent 40 or more hours per week hustling. That took me to April 2016 when I left my steady day job for online self-employment. I offered two weeks’ notice, and my boss asked me to stick around another month, which I did to ensure a smooth transition and avoid burning bridges. I wanted to leave my old team in good shape to move forward, not in a rough spot in my absence.

We had plenty of savings in the bank just in case it didn’t work out, and I can’t say I have not had a few stressful moments along the way. Over the first few months, my income did grow but not as dramatically as I had hoped. We sold our house and moved to expensive Southern California, so failure was not an option.

Struggling to Grow Income with a Busy Schedule

It wasn’t until a few months later that I noticed an interesting correlation. I was earning about 80 percent of my income from writing and only 20 percent from website work despite spending 80 percent of my time on websites and 20 percent writing. The Pareto Principle, or 80/20 rule, came to mind. I slowly started turning away and winding down my website business to give writing more attention.

Earning More and Working Less Than Ever Before

As I had more hours to focus on writing, I began to hunt for new clients in that space and deepen relationships with current clients. As I did, my income hit the hockey stick growth I had been hoping for. In October 2016, I broke past $10,000 per month for the first time. I have held my income above that level all but one month since.

Because I earn so much more per hour as a writer than I did as a web guy, I can work less and still grow my income. My typical workday starts around 7am and ends around 4pm or 5pm. Some days I work more, some days I work less. Some days I take a day off or half day off without too much worry about missing work. That’s the biggest benefit I’ve found from self-employment.

Control Your Hours, Income, and Schedule

I used to sit in a gray cubical where I had to work on what my boss said from 8am to 5pm or later every day. I was well compensated, but had little control over my life. I had limited vacation days and limited hours outside the office, and I knew there had to be a better way to live.

Now my income is tied to how hard I work, and I get to keep the profits. Now I set my own schedule and choose the hours I will be most productive to head to my home office. I can work in pajamas, sweatpants, shorts, or anything else. It’s pretty sweet.

I have yet to achieve the elusive four-hour workday on a regular basis, but I get them a lot more often now than when I had a day job. As this business grows and I begin to add products and services with better scale, I might even reach for the four-hour workweek someday in the future. But for now, I’m earning more and working less and I have to admit, it’s pretty sweet.