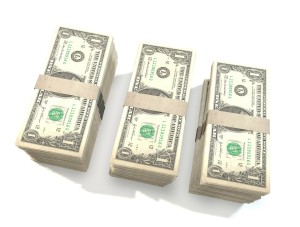 We spend a lot of time in the personal finance blogosphere discussing finances, taking out a home equity line of credit, and making short and long term financial goals. All this talk about money has got me thinking. How much do we really know about money? Actual money that is. For example, did you know that the collective debt in the United States is 10 times larger than all the U.S. money in circulation, which is 1.2 trillion! Amazing right? Check out these other fascinating facts about money.

Pennies are different in more ways than one

Although many are in favor of getting rid of the penny, there are more pennies produced than any other coin denomination. The U.S. Mint produces more than 13 billion pennies each year. Since it’s inception, there have been eleven different penny designs. The penny with the portrait of Lincoln faces to the right, while all other portraits fact to the left. There is no specific reason for this, it was simply the choice of the coin designer. Pennies are composed of mostly zinc, although each contains a small percentage of copper, too.

The reason behind the ridges

The ridges in coins serve two purposes. The ridges were initially created to prevent counterfeiting. Back in the day when coins were made of precious metals like silver and gold, counterfeiters would shave off the edges of coins to make more coins. Now the Mint no longer uses precious metals, but the ridges remain, and function as a form of identification for the seeing impaired.  There are 119 grooves on the edge of the quarter, and 118 on the ridge of a dime.

The introduction of paper money

The U.S. Department of the Treasury first issued paper U.S. currency in 1862 to make up for a shortage of coins. At the time there was a shortage of coins because people had started hoarding them as the economic uncertainty caused by the war made the value of items fluctuate drastically. Since coins were made of gold and silver, their value didn’t change much, and people chose to collect them rather than risk buying items that might lose their value. Paper money was initially composed of silk fibers, but it now a combination of 25 percent linen and 75 percent cotton.

The lifespan of paper money

Different denominations of paper money last longer than others, most likely due to the amount of usage. A $1 bill, which is the most circulated bill in the United States and accounts for almost half of the paper bills printed, lasts 18 months. A $5 bill last two years, a $10 bill lasts three years, and a $20 bill lasts four years. $50 and $100 bills last twice as long, typically going for nine years before they get worn out. When bills are worn out, they are removed from circulation and replaced.

The largest bill in existence