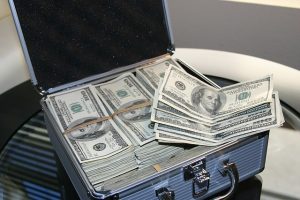 The world today is invariably focused on money – it influences everything from how countries are run to how poverty is measured.  So, it’s little or no surprise that we, the general public, find the subject of money to be something that leads our work-life decisions and is often the steering factor throughout our lives.

However, this might also be the reason that more than a quarter of America’s workforce is unsatisfied with their current jobs, according to the Bolste 2016 Industry and Productivity Report.  With so much emphasis constantly being placed on having a career that sets you up for life financially people often forget that an important part of living life is feeling happy, content or at least satisfied.  Is it possible to have both?

A large number of the population seems to be hardwired to want to make money.  It’s their driving goal when they are a college student and they won’t consider themselves to be happy until they’ve reached their financial goal in life.  Daniel Kahneman, a professor emeritus of psychology at Princeton, says that “wanting money is not a recipe for disaster, but wanting money and not getting it – that’s a good recipe for disaster.”

With the job market constantly in flux, one of the biggest worries for most people seeking a job these days is whether they will be able to get one at all.  Students invariably find it hard upon graduating to gain employment in the roles they desire, with ones who have studied a direct course such as engineering or an MSN in nursing administration usually being the most successful.  The constant struggle for jobs also means that people who are unhappy in their career are often too scared to leave unless they have another job to go into but this can have a disastrous snowball effect if their current job is causing high stress or depression.

A Good Wage but No Joy

There are a large majority of people who initially pursue a particular field of work because of the high salary they can achieve but once there they begin to realize that the work itself is unsatisfying.  It really all depends on people’s priorities – some people might see taking a lesser paid job as a bad choice and are willing to continue earning money from a career they don’t enjoy, however others might view their overall happiness as the most important factor in the decision making process and therefore be willing to change their career and follow their passions instead.

The general consensus about the winning combination appears to be that pursuing a career you are interested in will most likely lead to contentment and having the drive to work within that particular field could help secure you a decent wage.  Deciding what constitutes a satisfying job is relative to each individual.  Some people might choose to study an online RN to MSN program because they think that a job within the nursing field helping people in need will be deeply satisfying whereas others might find job satisfaction from doing something they love such as a career as a freelance illustrator.

In conclusion, there is no right or wrong decision, instead there is a world of options and it is up to us to consider all of the factors and decide what it is we want to achieve in our lifetime and what we consider a success.