There have been millions, or even billions of entrepreneurs in the history of the world. These are the men and women who take capital and turn it into even more capital, with some failing, others succeeding, and more excelling at what they do. Here are ten entrepreneurs that are worth looking up to. 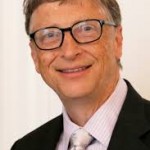 In quite a real sense, Franklin was America’s first entrepreneur. Unlike the other Founding Fathers, whose attainments and virtues are seen as anachronisms today, Franklin was a true role model of what many of us would become. This statesman was a printer, popular author, inventor and a solid businessman who knew how best to commercialize and market his ideas.

The man who invented the electric light, the phonograph and taking of motion pictures has a lot to be said about. He was certainly the world’s greatest inventor, and also knew how to exploit the profit potential of his creations, an entrepreneurial quality which asserted itself in his teenage years.

Apple’s two founders weren’t the first to launch a Silicon Valley computing giant company from a Palo Alto garage as Hewlett and Packard were before them, however they were certainly the first to democratize computing by creating a machine that was so intuitive, even technophobes weren’t put off by it.

The founder of Microsoft has revolutionized computing today as we know it, by creating an operating system that is used by a large percentage of the population. Microsoft has had a huge impact on businesses, organizations and individuals. Bill Gates is also known for his extensive philanthropist work.

Founding the multi-million dollar and globally popular social networking site Facebook whilst at college, Mark Zuckerberg is an entrepreneur worth admiring. Seeing the potential in the power of the internet, his business idea has took off to heights that he once only could dream of. Along with his wife Priscilla, Mark is also well respected for his humanity and charity work.

Not many people could say that they achieved becoming a millionaire before they were legally old enough to drive, but young entrepreneur Madison Robinson is well on her way to doing just that. At the young age of eight, she came up with the idea of Fish Flops – fun flip flops for kids that light up. The charming product has taken off, with Robinson still designing each pair herself.

When Shane Smith was the co-founder of youth magazine Voice of Montreal in 1994, he would probably have never imagined that his small, indie operation would develop into Vice Media, with 100 million users. A magazine that focused on arts, culture and news, Vice has expanded its reach to include a film company, publishing company, record label and an outlet for video journalism news.

Whilst he was on a flight, Brian Wong observed his fellow passengers playing games on their iPads. With the games featuring large advertisements that brought no real value to the whole experience, Wong noticed what he felt was a large oversight by marketers. So, he developed Klip – a mobile apps reward platform that brands can use in order to reward customers when they earn an achievement playing games. According to Forbes, Klip now reaches seventy million users across a range of 1500 different apps.

Southwest Airlines was, like many businesses, born on a cocktail napkin but it took a lot of hard work in order for it to grow. In the first few years of business, numerous other Texas airlines tried to keep Southwest grounded with lawsuits, however Kelleher stood firm and fought through, bringing the company to what it is today – one of the only profitable airlines in the US.

John Lemp is a truly determined entrepreneur and role model for anyone looking to start their own business. In addition to his previous business ventures, Lemp has also planned, designed and originated hundreds of original and unique flash games, some of which have been licensed. Since their commencement in 2002, he has led these companies and enabled their development.

Which entrepreneurs do you look up to? Whether it’s a local entrepreneur who you know personally, or a famous entrepreneur who has started a globally known company, it’s great that you have a role model in your work. If you’d like to tell us all about your most admired entrepreneur, leave a response in the comments.